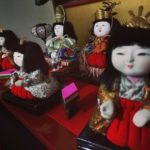 Hina Matsuri snuck up on me this year. There has been so much going on! So I admit this is a bit late!

Peach Blossoms have long been associated with girls because of their pretty and dainty appearance and it is a day for families to celebrate their daughters and wish them healthy, happy and prosperous lives.

Families with little girls begin the preparations for these festivities weeks in advance when Hina Dolls are brought out of storage and placed on display in the middle of February.

Although some families may display only one or two dolls most people are familiar with the elaborate displays of multi-tiered platforms covered in red and gold with a full court of royal dolls dressed in the elaborate kimono of the Heian Era. Accessories can include miniature food, furniture, animals, lamps and very often, peach blossoms.

While these sets are traditionally family heirlooms they can now be bought with a more modern twist to the dolls costumes.

Hina Matsuri dates back over 1000 years and is believed to have originated from the Chinese tradition in which you transferred your misfortunes to the dolls and then released them to the rivers to send the bad luck away. At the time the dolls were made of straw or paper not porcelain.

In some rural areas of Japan, you can still find this custom, called hina-okuri or nagashi-bina, in which people float paper dolls down the rivers.

“The earliest record of displaying the dolls as part of the Peach Festival comes from 1625, for Emperor Go-Mizunoo’s daughter Oki-ko. Imperial court ladies set up equipment for her to engage in doll play (雛遊び, hina asobi). After Oki-ko succeeded her father as the Empress Meishō, Hinamatsuri legally became the name of the holiday in 1687.”

Special food and treats are also eaten at this time, dyed in the colors of spring and the peach blossom, which blooms a vivid pink.

The one that is most well known though is Hishi Mochi – a tri-coloured sweet in the colors of the festival. Pink for the peach blossom, white for snow and green for the coming spring. A Hina Ningyo (Hina doll) set will almost always include a representation of this amongst the dolls.

The day after the festivities the dolls must be returned to storage or it is believed your daughter will have a delayed marriage. Though some larger hotel and department store displays remain up til the 6th or 7th.