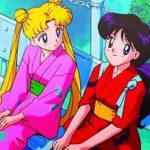 March 7th marked the 28th anniversary of Sailor Moon’s debut on Asahi Television. It aired at 7pm on Saturday nights

In honor of the anniversary here are a few pics of Sailor Moon and scouts in kimono!