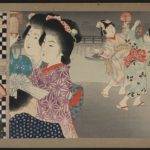 Asanoha is one of my favorite kimono patterns. Especially when I see it done in Sashiko 刺し子 (Japanese embroidery) with a crisp white silk thread against an indigo background. Although it is equally beautiful as a subtle under pattern to a yuzen 友禅染 (resist paste dyeing technique) design.

Let’s take a look at this kimono pattern…

The Pattern of Asanoha 麻の葉 represents hemp leaves. It’s a pattern that has been used to decorate Buddhist statues since the Heian period 平安時代 (794 – 1185) .

“Asa” means hemp and “ha” means leaf. The design has 6 diamonds radiating from a center point (Although most hemp leaves have 5-7 leaves).  Hemp was a very important plant in Japan as it was the primary fiber used in clothing along with silk until cotton was cultivated in the Sengoku period 戦国時代 (1467 to 1615). Most original yukata 浴衣 (summer kimono) and underclothing were made of hemp or silk.

Hemp grows quickly, does not need much care and is durable so it is often used in young children and baby clothes in the hope that they will grow strong and healthy